Two years ago I was focusing on boosting reading engagement among my struggling fourth grade male readers.  As part of my interventions, I encouraged my students to read graphic novels, partner read, and write about their reading.  After a few months of experimenting with these interventions and collecting data, I noticed great increases in reading engagement and enthusiasm in my students.  I was of course very pleased with their growth in this area, but this growth had stimulated a new awareness in me.  I noted that while many of my students may have become more engaged in their texts, their comprehension of what they read and the knowledge they extracted from it definitely had room for improvement. This thought is reflected in a journal entry I wrote on January 31, 2012:

Another thing with Michael* is some of the work I’ve collected from him makes me want to start a new cycle of research around a slightly different topic. Ok, so now that Michael* is a much more enthusiastic reader, thanks in some at least small part to the interventions I tried, how do I boost the quality of his reflections as he reads?

Raising students’ comprehension and critical thinking about their reading felt like a much tougher challenge than raising their engagement because the typical means by which I’d tried to accomplish this in the past (conferencing, monitoring comprehension mini-lessons and modeling) felt like reactive, scattershot, and teacher-directed mechanisms.  I was looking for an intervention that students could use proactively as a scaffold for building comprehension and critical thinking as they read.  Upon hearing this, an instructional coach at my school suggested I read Make Just One Change by Dan Rothstein and Luz Santana.  The more I read about the Question Formulation Technique, the more I believed that the process of self-generating questions could help me accomplish my teaching goals.  I began implementing parts of the process within weeks. Make Just One Change by Dan Rothstein and Luz Santana was my primary source for learning about how to use and scaffold student generated questions to improve learning. The book begins with the interesting observation that since the days of Socrates, education has centered around teachers asking questions to students. The impetus behind teaching questioning is to flip this paradigm so that students are the ones asking the questions. This is a lot harder than it sounds because teachers often want to ask questions out of sheer habit, and fostering conditions that are fertile for student generated questions is quite a delicate process. The process is called the Question Formulation Technique (QFT). The authors argue that it promotes divergent and convergent thinking, and metacognition. When I implemented the QFT two years ago, I saw many of the same improvements in student motivation and thinking about texts.  However, the process of the QFT is a framework that can be modified to fit the needs of the students, and last year I wanted to see the effect that teaching students to categorize questions with a more complex framework than “open” vs. “closed” would have on their thinking.  Research suggests that “It is useful to explicitly teach the different types [of questions]; this knowledge of question types broadens their thinking about larger possibilities.” (Mazzola, 2009, p. 42).  It also provides students with an additional tool to evaluate and improve the questions they generate (Chin and Osborne, 21). In the educational world, a number of taxonomies have been used to provide students the understanding and terminology necessary to differentiate the types of questions they have asked.  Last year I chose to use Bloom’s taxonomy.  Originally devised as a scaffold for teachers to generate questions, the taxonomy differentiates cognitive processes into six major categories: remember, understand, apply, analyze, evaluate, and create. After I first introduced and explained Bloom’s Taxonomy to my third and fourth grade students, I gave students a bank of questions around a particular focus.  In groups, students had to classify what level of Bloom’s taxonomy each question fell into.  We reviewed every group’s answers as a whole class, taking time to discuss why each question fell into a specific level.  I also spent a fair amount of time asking questions during read alouds, and asking students what levels they thought the questions fell into.  Afterward, I asked them to start making observations about when questions of a specific level tended to be asked (i.e. understanding questions were more common at the beginning of a story, analyzing and evaluating questions were more common at the end of the story), about the purpose of the question, and types of thinking that each type of question elicited.  We then came up with sentence stems to help students formulate questions at different levels of Bloom’s taxonomy.  I was careful not to emphasize that a particular level of question was better than another, my priority was getting students to think meta-cognitively about the questions they asked. [caption id="attachment_2921" align="aligncenter" width="318"] 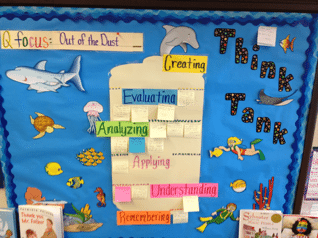 Students classify their questions using Bloom's Taxonomy[/caption] When we started to integrate our work on Bloom's Taxonomy and the Question Formulation Technique, students truly took ownership of the questioning and evaluation. I eventually created a “Think Tank” which functioned as a physical space where students could place the questions they generated in the appropriate level of Bloom’s Taxonomy.  Sometimes we met on the rug around the Think Tank, using it to categorize the questions students had generated on post-its about the Question Focus (QFocus) we were discussing.  Over the course of the year, the Think Tank would be a valuable tool in scaffolding how students generated and discussed questions.
After several rounds of the QFT process, students were already spontaneously looking to the questioning protocol as a tool to discuss and better understand the content we were learning in Expedition (social studies) as evidenced in this journal entry from February 7, 2013:

Today we were going through morning meeting as usual and we're reading the morning message, which is about how we're going to learn how to help stop global warming and save the polar bears.  Jonathan* raised his hand and said: "Are we going to ask questions to help the polar bears?"  I was really confused, and I asked him what he meant: "I don't understand Jonathan*, how can questions help polar bears?"  He said, "No, I mean are we going to put "polar bears" up there [pointing at the Q Focus tab above the Think Tank (where they generate questions and categorize them according to Bloom's taxonomy)] and then come up with questions to help them?"  The kids, especially Malcolm*, seemed really excited about this prospect.

I had students generate questions under the Question Focus (QFocus) of “Polar Bears and Global Warming”.  They prioritized the question that they felt was most important to answer in order to understand the QFocus in our Think Tank.  To adequately discuss all of the questions, we had to break up our Socratic Seminar into two sessions on two separate days. On the first day, our conversation centered on Malcolm's* question: "Why do we have carbon dioxide?" which he revised to "Do we need carbon dioxide?".  It was really interesting to hear students synthesizing how carbon dioxide is a part of their life in terms of how activities like driving in a car or playing videogames involve emitting more carbon dioxide into the atmosphere. On the second day, I was able to take more complete notes: Kara*: Why are polar bears dying? [Tim* gives a fairly complete answer, connecting global warming to changes in the polar bears' habitat] Kara*: Then I have another question: Why do polar bears have specific habitats? Nicole*: Polar bears have to live in the Arctic because if they don't they can't catch their favorite foods. Terrence*: Their bodies are made for extreme cold weather. Daquan*: Why won't the scientists make more ice in Alaska? This led to a great review of concepts that ranged from the states of matter to the greenhouse effect.  It prompted a nice patch-up of some gaps in knowledge that I hadn’t been aware of from our mini-unit on global warming.  Most importantly, it was the students who had solicited the QFT as they processed what we were learning about in our global warming unit; this was clear evidence that the QFT was a process that students viewed as an authentic and effective tool for their learning, not just something that their teacher was making them do.
*Student names have been modified

Robert Welch taught third and fourth grade on the west side of Chicago for five years.  During his last two years of teaching, he was a fellow of the Chicago Foundation for Education's Action Research Leadership Institute.  He conducted action research on literacy interventions to engage underachieving male readers, and the Question Formulation Technique's impact on student learning.  Robert documented much of his data and reflections from his action research on a blog: http://maleachievementgap.blogspot.com/  He currently works as an instructional coach for new teachers in the Academy for Urban School Leadership's network of schools in Chicago.