How can teachers foster social awareness and empathy through student-generated questions?

Teachers are often looking for new ways to build connections between course content and their students’ lives. In this classroom example, Erin Wynn, a seventh-grade English language arts (ELA) teacher, used the Question Formulation Technique (QFT) to engage students at the start of a new literature unit, help students set their own learning agendas, and tap into real-life social dynamics and emotional development of her students.

“If everyone were the same, would we still have stereotypes?”
“Does your gender affect how much someone judges you?”
“How does society teach us how to treat each other this way?”
“What can we do to stop bullying?” 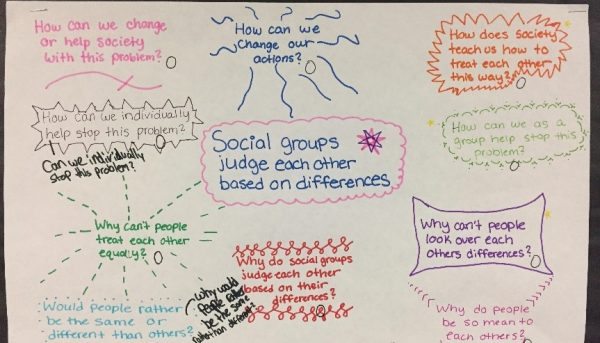 Through the QFT process, students explored the prevalence of stigma and stereotype in their own lives, investigated complex socioeconomic inequities, and began asking about how they could effect positive social change. Below, Wynn describes her planning process and offers insights and reflections on the lesson.

Topic
The Outsiders by S.E. Hinton.

Purpose/Objective
To engage students at the start of a new literature unit and generate student questions for a culminating Socratic Seminar at the end of the unit.

“I decided to use the QFT as a way to get students to begin examining a key dynamic in the novel. After much brainstorming and deliberation with a colleague who was doing the same lesson, we came up with the Q Focus: ‘Social groups judge each other based on differences.’ It is the dynamic that is at the root of the conflict of the book and many of the themes as well, so before they read the novel, I wanted kids to examine this dynamic and the questions they have about it as they think about how they see this happening in the world and in their own lives at school.”

Question Focus
Social groups judge each other based on differences.

On Question Focus design
“I shared [the QFT] with my colleagues and many of them used the QFT as the launch to our beginning of the year Socratic Seminar about the assigned summer reading novel, Freak the Mighty. We used the QFocus ‘Relationships and identity in Freak the Mighty.’ We realized that the focus for that QFT was a little too abstract and vague (which is why we spent so much time formulating a better focus for The Outsiders QFT) but we still considered the activity a success.” 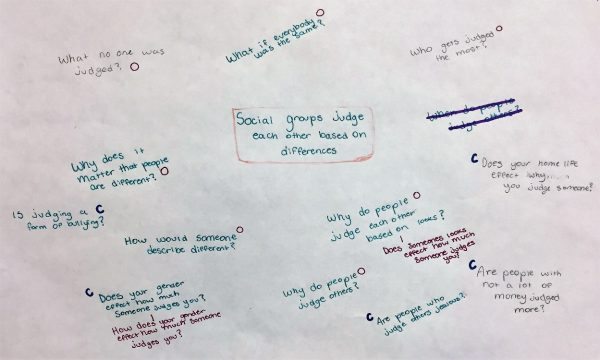 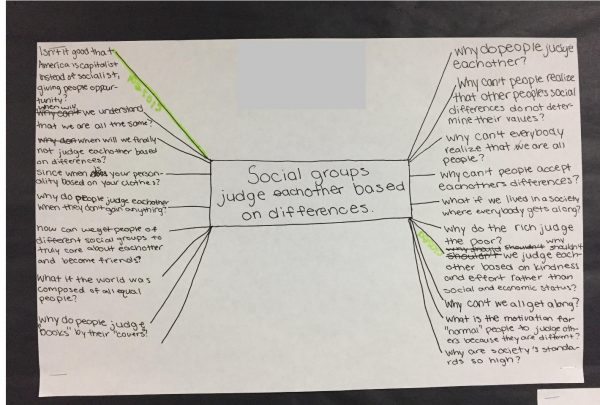 Prioritization Instructions
Choose three questions you find interesting and would like to hear the class discuss in a future Socratic Seminar. 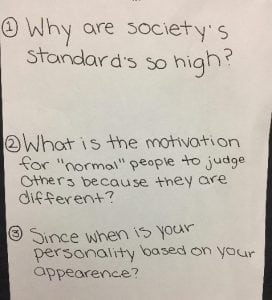 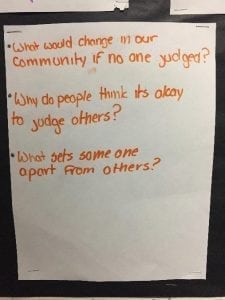 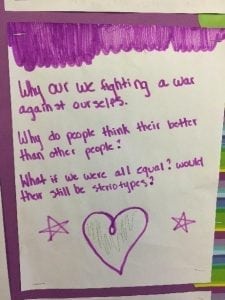 Group 1 (black):
Why are society’s standards so high?
What is the motivation for “normal” people to judge others because they are different?
Since when is your personality based on your appearance?

Group 2 (purple):
Why are we fighting a war against ourselves?
Why do people think they’re better than other people?
What if we were all equal? Would there still be stereotypes?

Group 3 (orange):
What would change in our community if no one judged?
Why do people think it is ok to judge others?
What sets someone apart from others?

Next Steps with Students’ Questions
“When we are finished with the book, we will have a Socratic Seminar using the priority questions students choose as the fuel for the discussion. Because they will have finished the book by this time, they can draw examples from the book and understand the story in a deeper way as they discuss possible answers to their questions. They can also draw connections between the novel and the dynamics they see at work in their school and in our world.”

Reflections
“This is the second time they have done a QFT. Because they had already been over the rules and knew the structure of the activity, it went much more smoothly this time, and students generated many more questions. Overall, most groups came up with really thought provoking and touching questions. I was surprised at how many angles they looked at the idea of “social groups” from without any prompting. Many groups wrote questions about groups based on gender and differences in economic class. Questions about economic equality also led one group to ask, “Isn’t it good that America is capitalist instead of socialist, giving people opportunity?” That was surprising to me that a 7th grader would consider class complexities to this degree.

Many groups considered the motivation about why we as humans separate ourselves into groups or judge people as “less than” us if they are different. Many groups questioned how we learn this behavior. Perhaps most touching were the questions that asked things like, “What would change in our community if no one judged?” or “Why can’t people overlook each other’s’ differences?”

Share your work
How do you build community and help students develop social awareness and emotional intelligence in your classroom? Share a story or tip in the comment box below and we may feature you as part of our ongoing look at the role of student questions in social-emotional growth.