It all began with a question.

For writer and journalist Rebecca Skloot, it was a question she asked as a high school student in a college biology lecture that launched her into a decades long research and writing process that eventually became the New York Times Bestseller, The Immortal Life of Henrietta Lacks. 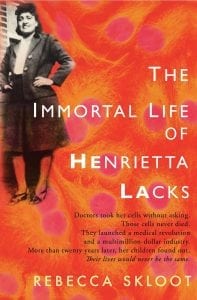 After a professor casually mentioned that the first immortal human cell line originated from a sample of cervical cancer cells collected, without her knowledge or consent, from a black woman named Henrietta Lacks, Skloot peppered the professor with questions: “Where was she from? Did she know how important her cells were? Did she have any children?”

“I wish I could tell you,” the professor responded, “but no one knows anything about her.”

Henrietta’s cells, known as HeLa cells to scientists worldwide, quickly became, and remain to this day, ubiquitous in medical research, contributing to significant medical breakthroughs including the polio vaccine, chemotherapy, cloning, and in vitro fertilization. How was it that no one knew anything about the woman they had been taken from?

Skloot set out to find answers. She eventually partnered with the Lacks family and in particular, Henrietta’s youngest daughter Deborah Lacks, who had pressing questions of her own.  Throughout the narrative, Deborah “ma[kes] lists of questions” for Skloot, and at one point “bombard[s]” a doctor and researcher at Johns Hopkins “with questions: what made her mother sick? How was part of her still living? What did that mean? What did Henrietta do for science?”

More than 7 years after the publication of the 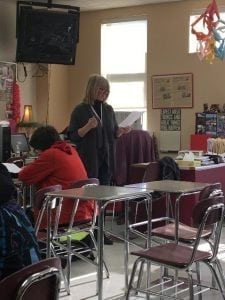 book and 65 years after Henrietta Lacks lived, 9th Graders in Ellen Gammel’s honors English class in Fitchburg, MA were burning with some of the same questions. After reading the first four pages of the book and studying the image of Henrietta from the front cover, students wanted to know:

Why is there no record of her life?
Why is it significant that she was a black woman?
Did her family get money for her cells?
Do you think she’d be happy with what was done with her cells?
Did they have permission to extract cells?
Why does she have three names?
What would have happened if doctors didn’t take her cells?
Was her story forgotten/ignored because she was black?

Through the Question Formulation Technique (QFT), students immediately zeroed in on the racial and economic forces at work in the Henrietta Lacks story and some of the most complex issues in bioethics and medical research fields today. 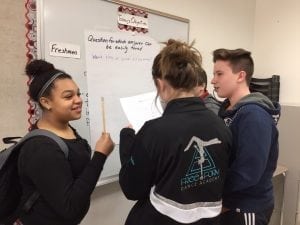 Indeed, the Henrietta Lacks story underscores the critical importance of question-formulation as a source of agency, a mechanism for holding institutions accountable, and a pathway for participating more effectively in decisions that affect you, your family, and your own medical care.

While Deborah Lacks and Rebecca Skloot were empowered to ask questions and able to insist on answers, it seems clear that Henrietta herself, was not. In recounting Henrietta’s fatal illness and medical care at John Hopkins Hospital, Skloot notes,” there’s no indication that Henrietta questioned him; like most patients in the 1950’s, she deferred to anything her doctors said. This was a time when ‘benevolent deception’ was a common practice…doctors knew best, and most patients didn’t question that. Especially black patients in public wards. This was 1951 in Baltimore, segregation was law, and it was understood that black people didn’t question white people’s professional judgment.” Even decades after her death, Henrietta’s family continued to give blood to Johns Hopkins researchers without full knowledge of what it was being used for.

Today, in part because of stories like Henrietta Lacks’s, patients have greater expectation of full disclosure from doctors and human subjects in medical research have rigorous protections that didn’t exist in the 1950’s. Even still, asking questions continues to be critical to advocate for equal access to quality medical care for all people, to participate in difficult discussions about end of life care or treatment options, and to hold institutions and systems accountable to the people they serve.

In many different situations, all individuals can strengthen this fundamental skill of asking questions on their own behalf to more effectively partner in decisions that affect them.

Below, read about how Ellen Gammel used the Question Formulation Technique to engage her students and help them set their own learning agenda for this interdisciplinary unit. 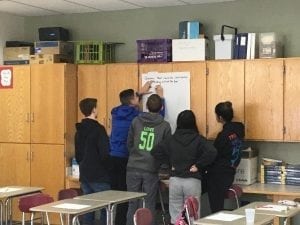 2) Topic
This lesson was part of an introduction into an interdisciplinary unit on The Immortal Life of Henrietta Lacks by Rebecca Skloot. While students read the text in English class, they will simultaneously learn about cell biology, bioethics, and DNA in their Biology class.

3) Objective
To engage students at the start of a new literature unit and help students generate their own guiding questions for the remainder of the unit.

“I find that the QFT really gets the curiosity muscle moving. This is such an engaging text, but if students are not invested in wanting to know more, then so much of that engagement can be lost.” 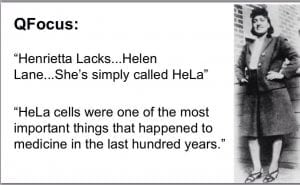 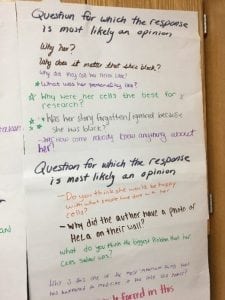 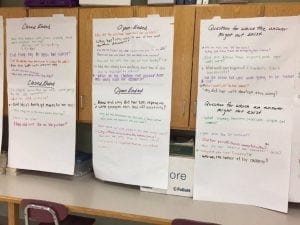 Questions for which the response is most likely an opinion:

Why her?
Why does it matter that she’s black?
Why did they call her Helen Lane?
What was her personality like?
Why were her cells the best for research?
Was her story forgotten/ignored because she was black?
How come nobody knew anything about her?
Do you think she would be happy with what people have done with her cells?
Why did the author have a photo of HeLa on their wall?
What do you think the biggest problem that her cells solved was?
Why is this one of the most important things that has happened to medicine in the last 100 years?
[/expand]

6) Categorization instructions
Gammel’s students are already comfortable with closed and open ended questions, so this time, she decided to push students to categorize questions in a new way. Gammel designed a gallery walk activity in which small groups of students rotated through posters hung around the room. Each poster was labelled with a different category: “questions that have answers that can be easily found,” ‘questions that have answers that cannot be easily found,” “question for which the response is most likely an opinion,” “questions for which the answer might not exist,” “closed-ended questions” and “open-ended questions.” At each poster, groups chose one question from a list of questions they had generated and copied it onto the poster.

7) Prioritization instructions
Choose one question you would like to explore further. Put a star next to it on the poster.

8) Next steps with students’ questions
Posters will remain on the classroom walls during the unit so that students can revisit their questions, answer them, or add more to the lists.

Questions also led to a rich follow up discussion on Day 2 of the intro lesson in which students discussed how one might use a specific type of question, what a question’s purpose might be, and in what ‘order’ they might ask the questions.

“What surprised and interested me was their interpretation of the ‘Answer not easily found’ category; students interpreted that as a question with an answer they couldn’t easily find vs. one that isn’t actually easily found. I wasn’t thinking they would internalize that so that it wasn’t easily answerable for them, as I was looking for questions for which information might not be available. This led into an interesting discussion about talking to experts and how to search for information.

Another interesting discussion revolved around which questions you would ask first. The class was split about 50/50. Half said they would first answer ‘closed ended’ questions or those with ‘easy answers’ so that they could gather information which could in turn produce more questions. The other half advocated for tackling the ‘thinking outside the box’ or ‘questions without easy answers’ first, in order to decide what type of easily found info needed to be gathered. It was very interesting looking at this from both directions.”

9) Reflections
“This was not the first time students have used QFT, nor is it the first time they have been presented with the concept of questioning. This time, as they’ve gotten more comfortable, I observed them asking questions that go beyond basic information gathering. Thinking and curiosity were evident, which is exactly what I wanted out of the lesson – for them to have a sincere curiosity about Henrietta Lacks and her story.

I am a creature of routine, and I think that 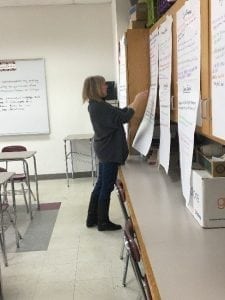 classrooms work the best when students have routine and know routine. Routine doesn’t have to be simplistic or robotic, but instead is something for which the expectations are clear and consistent. The QFT provides students a protocol for a task that is often very difficult. They worry so much about being “wrong,” but the QFT is designed so that the judgement component is off the table, freeing students from that burden of being wrong and allowing them to simply be curious and ‘think on paper.’”