Educators in Japan, as elsewhere, are seeking ways to provide a forward-looking education to the generation of students whose lives and careers will unfold during the heart of 21st century.

The education ministry revises curriculum guidelines every 10 years, and proposed guidelines for the upcoming decade call for “deep learning through proactive efforts and dialogue,” according to the Japan Times. The newspaper notes this goal would require teachers “to devise and adapt to new ways of teaching.”

These priorities may sound familiar to teachers in other countries, including the United States, but the pathway toward achieving these goals can often seem shrouded in fog.

This may help explain why the Japanese translation of Make Just One Change: Teach Students to Ask Their Own Questions, is one of the leading education titles in that country – recently a top-15 seller in Amazon’s general pedagogy category.

A teacher in Tokyo remarked ‘the process of the QFT turns on a learning switch’ with students.

The book outlines the Question Formulation Technique, a teaching tool that builds the ability of students to generate and use their own questions – leading to more engagement, curiosity, ownership of learning and equitable classroom experiences along the way.

“We knew the book had been translated into Japanese and into Chinese, but we really had no idea how successful it was,” said Dan Rothstein, co-author of the book and co-director of The Right Question Institute, when he learned about Make Just One Change’s top-seller status in Japan.

In part due to the book’s success and to enthusiasm among a handful of Japanese education leaders, Rothstein was invited to Japan in the winter of 2017. To mark the one-year anniversary of that trip, he reflected on the experience and what he learned in Japan.

Ken-ichi Sato, a professor of molecular bioscience at Kyoto Sangyo University, invited Rothstein to Kyoto and Tokyo to present to educators. Rothstein also traveled to Hiroshima for a presentation with the Hiroshima Prefectural Board of Education and teachers with the Asia Society’s Center for Global Education.

He was struck by the energy and enthusiasm of educators he met. “These were early adopters,” he said. “They were really ready and hungry, and they enjoyed going deeply into the QFT” – the abbreviation for Question Formulation Technique. “All three sessions were brimming with energy and intellectual ferment.”

The enthusiasm is noteworthy given time constraints on teachers in Japan, who assume significant administrative duties in addition to classroom work. When school is in session, “not all schools allow them to take professional development time,” explained Ouchi. “They sometimes don’t have time to look at new pedagogy or new ways to teach.”

The Japan Times put it more directly, noting that teachers are “said to be overburdened with desk work and supervising students’ club activities in addition to their classroom duties.”

Finding the time and energy to try new methods can be difficult.

It’s another reason some educators in Japan may be drawn to the QFT, which is an easily replicable technique that can be used more-or-less immediately. Among educators he worked with, the mentality was, “Oh, this solves a problem that I see in front of me every day, that students are not asking questions, they’re not engaged,” Rothstein said.

He said it’s “the exact same response that I’ve seen in the States, which is, ‘This is different than the way I traditionally taught. This works really well. It’s simple and easy to implement, and the students really are excited about it.’”

In Japan, the shelves in bookstores have a handful of titles outlining different approaches to active and inquiry-based learning, and Make Just One Change is one of the featured books. It suggests a receptiveness to new ideas in this area of teaching.

In the United States, “some of the approaches are fairly complicated,” Rothstein said. “Sometimes we enter a space where there’s some saturation of efforts to promote that kind of learning that actually kind of complicate things.”

“It seems that the space was a little more wide open in Japan,” he said. 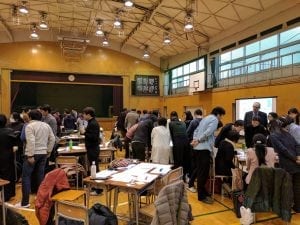 Educators across the spectrum have experimented widely with the Question Formulation Technique, and many who came to the sessions had a nuanced understanding of the QFT and brought rich examples of how they had used it across different classrooms, disciplines and grade levels, Rothstein said. One participant in the Tokyo training talked about how designing an effective Question Focus (the stimulus for student questioning) requires the discipline and rigor of writing a haiku.

As the person who invited Rothstein to Japan, Sato has blazed new trails with the QFT. One of his roles is director of the Center for Research and Development for Educational Support at Kyoto Sangyo University, and he has developed something called the “hatena-thon,” which in Japanese combines “question mark” and “marathon.” The QFT is at the center of the question marathons. Last summer Sato traveled to the United States to participate in The Right Question Institute’s international conference.

Designing an effective Question Focus (the stimulus for student questioning) requires the discipline and rigor of writing a haiku. 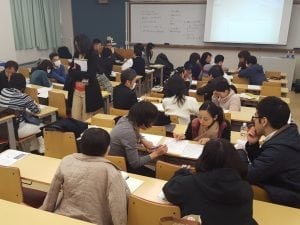 Naoki Iwase, a former associate professor of teacher education at Tokyo Gakugei University, has also been a QFT pioneer. Several of his students attended Rothstein’s seminar in Tokyo, and he is establishing a school that emphasizes student ownership of learning, collaboration, and inquiry and exploration.

Then there are the classroom examples.

Shion Inoue, who teaches at a private high school in Hyogo and previously worked at an International Baccalaureate Programme school in Osaka, has used the QFT with students in a literacy class on the foundations of knowledge – exploring what we know and how we know it.

Another teacher, in Tokyo, “showed me work that students had done looking at controversial topics, global topics, and how they had used the QFT,” Rothstein said. The teacher “was very excited by the depth of discussion and the understanding that it engendered.”

The first educator from Japan to reach out to The Right Question Institute was Kimie Hirano, an English teacher in Osaka. She became part of the core team that organized Rothstein’s seminars in Tokyo and Kyoto and contributed to the excellent translation of the materials used in the sessions.

A fourth-grade teacher in Osaka reported using the QFT in a low-income community, remarking how it provided an opportunity for all students to participate, including those who don’t consider themselves strong students.

Educators in Japan ‘provided evidence of the universal value and relevance of the QFT through their work.’

In the Hiroshima Prefecture, Rothstein was welcomed warmly by Board of Education Superintendent Kuniaki Shimozaki, Deputy Superintendent Ryukichi Sato and Director General Takanori Morofuji. Shimozaki, impressed by Harvard University professor Howard Gardner’s endorsement of Make Just One Change, spoke “about his own thoughts about education and the importance of combining both a bottom-up and a top-down effort to improve education,” Rothstein said.

In addition, Rothstein, with facilitation support from his wife, Ana Karchmer, an experienced designer and facilitator of applications of the QFT, provided an in-depth seminar for educators working on a new approach to education as part of the Asia Society’s Global Education Initiative.

Looking back at the experience, Rothstein said, “I was excited by not only the readiness and eagerness to learn more about the QFT, but also about the experiences people already had in implementing the QFT and the very positive results that they saw with their students.”

Students Value it, Too

As in the United States, students in Japan who use the QFT seem to appreciate its value.

“An uninteresting field can become interesting by asking questions,” said one student providing feedback about the process.

“I realized that the information I can acquire depends on how I ask questions,” said another.

A teacher in Tokyo remarked “the process of the QFT turns on a ‘learning switch’” with students, and a teacher in Kyoto noted “people’s backgrounds or academic levels do not matter in using the QFT,” which helps involve all students.

“Sometimes you wonder how it is going to translate across language and culture,” said Rothstein, “but what we saw [in Japan] was pretty much what we see here [in the United States].”

“I really appreciated the fact they provided evidence of the universal value and relevance of the QFT through their work, working with a Japanese translation and working in the context of Japanese education,” Rothstein said.

An Exchange of Ideas

A strength of the Question Formulation Technique is how it has been freely shared through a grassroots, decentralized process that has led to widespread adoption. While The Right Question Institute is home base for the QFT – a center of research and advocacy in connection to student questioning as well as a source of resources tied to the QFT – the technique is being used in more than a million classrooms in 130 countries around the globe. Educators in the field regularly find ways to adapt the technique to specific circumstances, and they exchange those ideas with each other and The Right Question Institute. 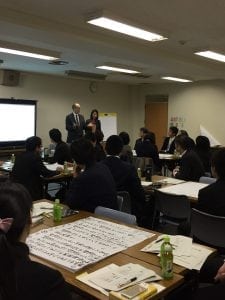 This exchange of ideas and friendship was another valuable part of the trip, according to Rothstein. In Hiroshima, Shimozaki presented Rothstein and Karchmer with two pieces of calligraphy. One reads “Friendship and goodwill,” the other reads, “Love and dream.”

“After our meeting in the superintendent’s office, we felt a responsibility as Americans to go and spend some time at the Peace Memorial in Hiroshima,” Rothstein said. “It was a very meaningful experience.” Later that night, a number of the educators in the session organized a dinner at a local restaurant off the tourist-path and had a spirited discussion about what they had learned.

Morofuji, the director general of the Hiroshima Prefectural Board of Education, was particularly intrigued by an example Rothstein had shared about introducing 5th graders to the study of variables in math. It’s an activity developed by Deirdre Brotherson of Hooksett, New Hampshire (NH). Brotherson first learned to use the QFT from state teachers’ union, the NEA-NH, and her example has now been shared around the world. The director general felt it offers a model way to teach math.

Rothstein, reflecting on the experience, said it “has made me think again about the warmth of the reception and my appreciation to Dr. Sato for inviting me and for the impressive commitment of the educators I met who are eager to innovate and improve the learning experience for their students.”